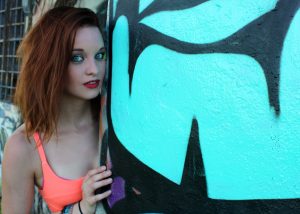 Since getting ‘bit’ by the ‘acting bug’ about twenty years ago, I haven’t been able to stop learning and applying different acting techniques and styles. I studied improvisation with Barbara Colaciello for eight years, and eventually formed a troop with some other students. We performed in various venues throughout the Jacksonville, FL area for four years before disassembling to attend different colleges.

After performing in countless productions all around North Florida, (Some of my favorites include playing Sabrina in ‘Sabrina Fair,’ The Mute in ‘The Fantasticks,’ Alice in ‘You Can’t Take it With You,’ and Octavius Caesar in ‘Antony and Cleopatra,’) I went on to study theatre at Florida International University in Miami. While there, I played Annie in ‘In the Next Room or The Vibrator Play,’ Beauty in ‘Sleeping Beauty,’ and Jo, Bee, and Alex, in ‘The Two Of Us.’ I also understudied for The Girl in ‘The Seven Year Itch’ at Miami Theater Center, and performed in an original play called ‘Earthquake’ at the South Beach Comedy Festival. In addition, I wrote, directed, and performed my own one-woman show inspired by the life and views of Charles Manson follower, (and attempted presidential assassin,) ‘Squeaky’ Lynnette Fromme entitled ‘X’d’.

Once in Los Angeles I found myself active in the NoHo theatre scene, performing with Defiance Theatre Company as Maid Marian in a feminist version of Robin Hood, ‘A Lady in Waiting,’ and as Amy in ‘Eviction Notice.’ I was fortunate enough to be cast multiple times in productions by the alternative/arthouse/horror themed venue, Zombie Joe’s Underground Theatre. Some of my favorites were The Monster in ‘Frankenstein,’ and Mother in ‘Popalypt1c.’ From there I went on to work in immersive theatre, performing with Delusion Interactive Theatre and Film in 2016 and 2018/2019. I played Amelia and Eve in these productions, ‘guide characters’ who led audiences through the story. As such, I was responsible for leading small groups of audiences through atmospheres such as a dense jungle, ancient Mayan ruins, spiraling and low-ceilinged caves, vampire laden halls, corpse-filled beds, and falling staircases before flying through the air on a wire, crashing through walls, scaring guests, then winning back their affection, and finally urging them to safety before doing it all again 10-20 times per night.

Most recently I studied under Diana Castle and Lacy Fisher at The Imagined Life Studio for eight months. Prior to that I have formally studied The Stanislavski Method, Michael Chekhov’s Technique, and The Sanford Meisner Technique, as well as some Jerzy Grotowsy and Commedia Dell’arte.

In addition to acting myself, I am a teacher and professional faerie who is passionate about the boundless benefits of playing and learning through theatre and imaginative play. I fully believe that they are the best ways to teach students about empathy while building self-confidence and positive peer relationships.

I have been working with children and adolescents for over five years, and I am constantly inspired by their talent, and ability to grow and surpass expectations. Acting is such a beautiful craft because true talent comes from learning about, and accepting your own individuality and self.

I’ve had the pleasure of being able to teach adolescents who have been admitted to the Behavioral Health Unit in Miami Children’s Hospital. These ‘seemingly unreachable’ teens, who’ve had every possible label slapped onto them, and have dealt with more obstacles than most adults, showed me some of the most incredibly vulnerable truths I’ve ever had the honor of witnessing in an acting environment, even to this day, years later. I’ve also been lucky enough to play and be silly with ill children in hospitals around the Miami area, as well as lead in-school acting programs through Miami Theater Center.

These days you can catch me in faerie form,  flying around to children’s parties bringing magic and whimsy in the form of balloon twisting, face painting, interactive magic shows, a myriad of puppet friends, intense silliness and so much more. You can book your own whimsical celebration by contacting the secrefaeries at happilyeverlaughter.com.